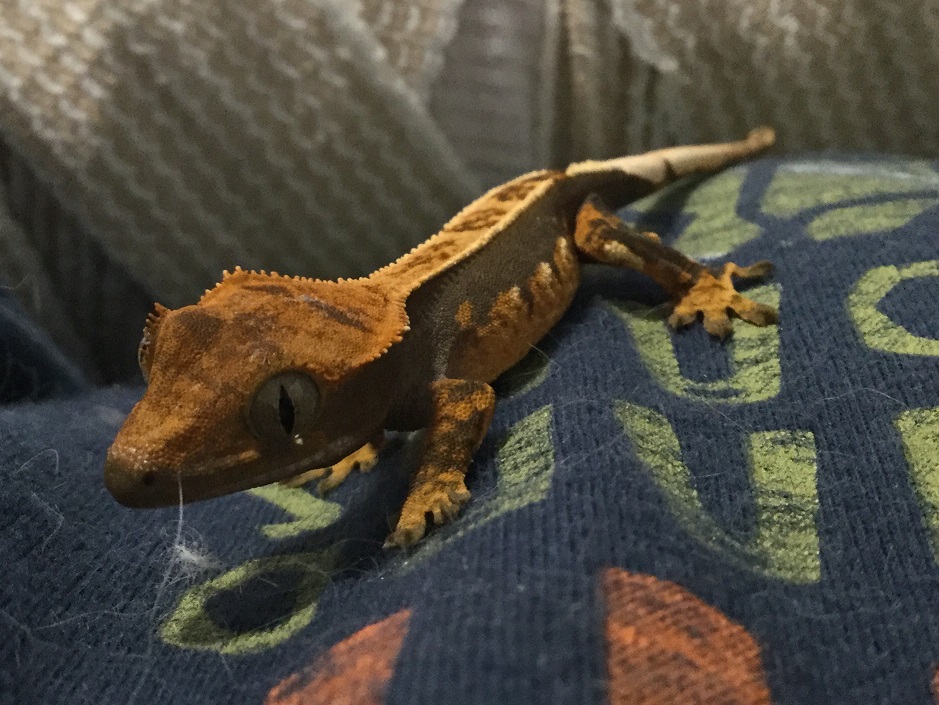 Hello, blog! It's been a while. A lot has gone on! For starters, I fractured my elbow and it really sucked! What happened is, I was uncovering the outdoor water spigot and there was an ENTIRE WASP NEST under there. I freaked out and turned to run away but slipped on the grass because it was still wet. I have a paved driveway and I landed on that real hard. I skinned up my palms and knees and got a compression fracture on my 'radial head'. So I was in a splint and then a cast for a while.

In BETTER news, I got a gecko! He's a crested gecko named Tarot and his morph is a harliquin pinstripe. I got him at a reptile expo and the expo itself was a ton of fun. I did a bunch of research and buying equiptment before I bought him. I'm gearing up to get a snake next.

Ever since I was little, I've loved reptiles. I always caught them outisde when I was little and had books and books and books about them. Now that I'm grown, have my own place, and income, I can finally do something with that passion. It feels nice. I've been feverishly researching and preparing for the snake. I'd like a ball python. I'm not really fussed about the morph but if I can afford a pretty one, I'll take my pick. I opened special commission prices to help save up for the remaining supplies I need. I got an AWESOME deal on a 20gal long tank. I've got my heat pad and the thermostat and the infared thermometer and all that good stuff. I'm missing the bits and bobs now like water dish and hides and things like that. I think the most expensive thing I have left is the hook. While the hook isn't REQUIRED, I've been advised that it's still a good tool to have.

Watch out or this will become a reptile page.

I've been driving all my friends bugfuck crazy talking about reptiles for over a month now. I've probably been focusing so hard because I've been out of work due to my arm. I should be going back next week. My therapist is getting in contact with a placement specialist at the office where they work to try and get me a different job. The grocery store is okay and I like my co-workers and I've learned a lot but I think I need to be in a job where my actual skills (computers) can be put to use. My cousins snubbed me when I mentioned I was looking for a better job. SORRY FOR TRYING TO IMPROVE MY QUALITY OF LIFE. WOW.

Uuuuuuh OH YEAH. I eat cereal now. That's really nice. My OCD has scared me away from anything milk-related but almond milk is amazing and I love it I'm so happy. I've missed cereal so much. 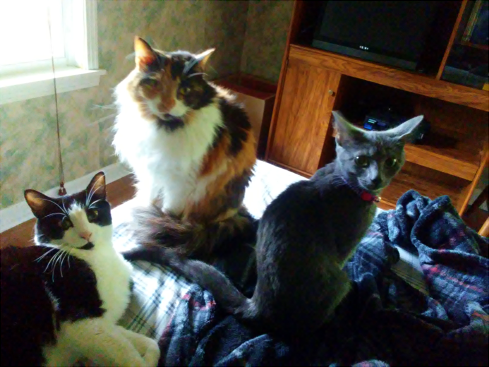 It's been a while, huh, e-diary? I'm trying to think of everything that's been going on. I've mostly just been working and playing Breath of the Wild. My friend from Texas came down to see me about a week ago and that was a lot of fun. I had to work on Mother's Day and that was not so much fun. It was insane and we had two baggers quit. One just up and walked and the other would have if we hadn't told him it would look bad on his resume. I dread to think what the coming weeks are going to be without them. We're so short-handed at work.

As of today, I'm trying to get back on my Abilify. I've just felt really empty and listless for months and it's hard for me to get invested in things. I feel like every time I try to get INTO something or feel a certain way ENTIRELY there's this weird ziplock baggie type material between me and it. It's the only way I know to describe it.

My house is an unholy mess. Having three cats and no energy will do that to you, but I wouldn't trade them for anything.

I had another entire weekend off work and I slept through 80% of it and I'm mad at myself.

I also went by the store to grab something and somebody said I'd been written down as a no-call, no-show even though I WASN'T SCHEDULED. So, that's fun. I'm exhausted and stressed and I didn't do anything fun all weekend I might as well have just worked the past two days.

Just one of those diary entires I guess.

Give Dr. Pepper a berry to help her grow big and strong!

It's a late night.

Not entirely sure what to write about. I'm still feeling out what I wanna do with this website. If you're reading this, I really appreciate you being here. In this day and age of social media constantly being sprayed into your face as though from a fire hose, I feel like it takes a special person to travel all the way to the little place someone has carved out for themself in cyberspace and see what they're up to. Not to knock social media because I fuckin love cat videos on twitter, but I'm just. Glad that you're here.

I'm currently reading a book. It is Sparky the Aibo: Robot Dogs & Other Robotic Pets by Pat Gaudette.

It was published back in 2006, which is when I would have been graduating high school. It's so cool to know that the AIBO community is still around. I watch their videos and fav their image posts and just have so much love for these people who continue to care for and share these cool little robots. A good working AIBO will cost you around $600.00 USD these days, which is a steal since when they originally came out they were over 2k, just like the newest AIBO which is the ERS 1000. I really want to meet an AIBO. I think it would be cool to own one, but after looking at all the pros and cons, getting an older model just wouldn't work out for me in the end. Things to repair them are rapidly disappearing and deteriorating and eventually there will be nobody left to pin the droopy heads on 210's or re-cell the custom batteries. It's like watching an animal go extinct and it hurts my heart. The newest AIBO which came out last September is very cute and it's amazing all that it can do, but there are some things about the older ones, specifically the 210 and S7 models that I find infinatley more charming. Maybe it's the lack of eyes. ERS1k AIBOS have these beautifully fully animated eyes. On the older ones, you got to use your imagination a little when it came to what your robo pup was thinking or feeling. I also prefer the beeps and chimes over the more dog-like sounds. Maybe if they were a little more compressed or tinny.

I won't be able to afford one of these guys, but watching and admiring them is 100% free. Except for the book. That wasn't free, that came from amazon.

I can't really pinpoint why I love virtual pets so much--hand held beeping watches that poop and then die, static images of pets you dress up and then promptly forget about, screaming furry owlcats that live in the back of your closet and still may-may you even though they haven't seen the sun in eight years. I think maybe, as an artist, I'm obsessed with creating the illusion of life. I make cartoons and illustrations and for the short moment folks look at those things, I try to convince them that the characters they're seeing are really there, feeling their feelings.

Click Lulu to help her grow big and strong!

I had a good day over all. My step parents came to visit me and we all went out to eat. I got a Table Mate II in the mail that let me finally enjoy my laptop on the sofa.

My computer mouse has been driving me crazy for ages because it would double click when I didn't want it to and sometimes wouldn't STAY clicked when I tried to highlight text. In a fit of desperation I took it apart to find it utterly stuffed with cat hair.

It works much better now. I have a gross pic of all the stuff I pulled out of it here for the curious.

Click Lulu to help her grow big and strong!

Had today off. It was nice. Yesterday was a total shit show at the grocery store. SOmebody threw up outside the bathroos and somebody got in a fight and the cops had to be called. BUT TODAY WAS NICE. An event in an online roleplaying group I recently rejoined went up and I've been RPing with people on there. I drew a picture for it and folks seem to like it pretty good. Played with the cats a lot. I got a package in the mail from my friend Sam and it had some really nice things in it--a tote bag, a two-headed dragon figurine, some washi tape and some halloween party favors along with a wooden bat she painted to look like one of my characters.

February 2, 2019
Oof. What a fucking week. I usually don't work five days in a row--the hours themselves weren't bad, but everybody was NUTS this week. Friday was the worst because it was a tripple whammy of GROCERY STORE MADNESS INDUCERS: 1-- first of the month. First of the month is always insane. 2--it was a Friday. Fridays are when folks get paid, have a chance to actually GO shopping, and are just busy in general. We always expect this. But then 3--super fucking bowl weekend. I NEVER WANT TO SEE ANOTHER BAG OF DORITOS AGAIN!!!! GOD.

I have today off though, so that's nice. I'm going to try to get a haircut if I can stay awake long enough.

BACK ON THIS BULLSHIT AGAIN!!!!! I thought I'd quit this kind of game but hhaahAHAHAHAHAHA click my monsters