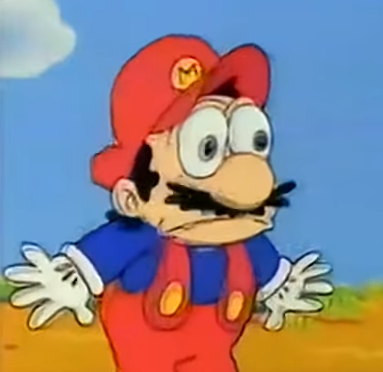 I found this movie by accident (which is how I've found 90% of the things on this site) by scrolling through youtube and noticing a thumbnail depicting the super plumber brothers that did not look like the Saturday morning cartoon I grew up with.

The animation has an incredibly charming style that I honestly like way more than the Mario Brothers Super Show. I think this was the first animated Mario thing they made because Luigi doesn't even have his signature green suit to contrast Mario's red.

I especially loved all the random game sound effects. That's one thing that DID carry over to the show.

I'm not going to bother describing the plot because you can just read about it [HERE] on wikipedia. Another interesting thing is that the brothers either own or work at a grocery store in the desert. Video games exist in their world (Mario seems to be an avid gamer) and various Kingdoms also exist-- Flower, Metal, Mushroom, and possibly more. I just like getting to see all these concepts that they were throwing around before the animated 'canon' was really a thing and too many games had been made. There were even a couple of cute songs that accompanied the brothers on their traveling montages.

Yoshi didn't exist yet (I think) so there were no fun dino riding scenes. The brothers were not without an animal companion however... This motherfucker is in the entire movie and instead of barking or saying 'wan wan' or anything like that he just goes AAAHHH AHHH AHHHHH AHHHH all the time. It's upsetting. There are a few cute hi-jinks with the dog beast but mostly he just gets the adventure started by stealing the amulet that Princess Peach dropped when she came out of Mario's TV and was then kidnapped by King Koopa. It's a weird movie. I wonder if they were hoping for him to become popular and end up a mascot. Or, well, no, that's what I thought during the movie itself...

TURNS OUT WE'VE BEEN BAMBOOZLED, FAM. The horrible screaming dog was actually THIS dude the whole time ala Howl's Moving Castle.

This rando and Princess Peach get together and Mario tearfully goes on his way after everything is said and done.

In the end, I enjoyed it and would probably watch it again. 6/10